This week Year 7 took an epic safari to Tumaren Camp, after a much longer and bumpier journey than anticipated we were straight into a boma of female Dromedary camels and their young calves. It was incredible to be up close to the animals that we had been learning about during our Geography lessons. The majority of the children took the chance to milk the camels, some being quite taken aback by the texture and warmth of the udders!

The children asked the heardsmen a range of well thought out questions such as: how long can they survive on the fat from their hump alone? What is the gestation period of camels? How do they provide people with an income?

We then went over to see the much larger and friendlier male camels. Here the children were able to stroke them and look at the adaptations such as their closing nostrils that prevent sand entering during sandstorms and their thick leathery knee pads that help to cushion the camels as they sit and stop their skin being burnt on the hot sand.

After much build up and anticipation the children got onto the camels and headed off for a short ride! There were many squeals as the camels jolted back down into the sitting position. Some of the children were so enamoured by the camels, that they learnt the commands to make them stand up and then sit down. One of the rangers remarked ‘the camels think they are in an aerobics class with all this sitting and standing!’

We then hit the road again, ready for the mammoth journey back to school. A welcomed distraction from the long drive, came in the form of seeing herds of elephants, towers of giraffes, a sounder of warthogs and antelopes aplenty. 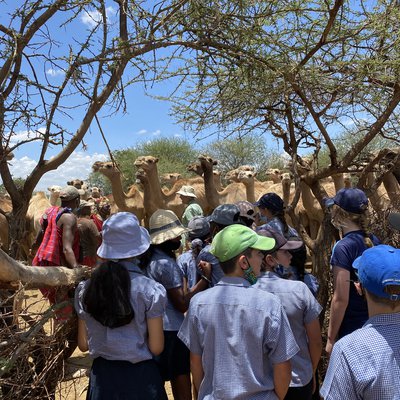 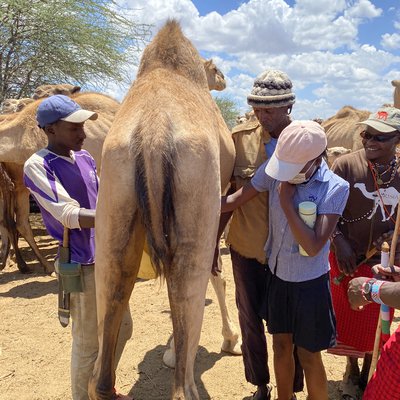 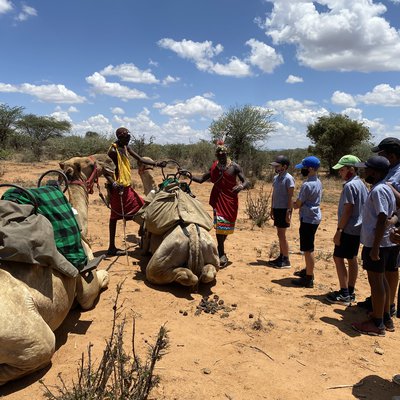